There are over 40 hill forts in the Daugava, Gauja, and Metsepole Livonian regions and a third of these have been the subject of archaeological investigation. Some of these can be considered early towns. The artefacts discovered thus far show evidence of trade and crafts, for example, two iron-melting furnaces, a metalsmith’s workshop, the remains of a potter’s kiln. Work was done on metals, bone, horn, amber.

The Aizkraukle, Turaida (Caupo’s great castle), and Satesele hill forts have also been studied. The Satesele hill fort in the Turaida Livonian region was the main centre of the Livonian king Dabrelis’s territory. It is thought that in the 11th century the Livonians inhabited the Talsi hill fort in the northern part of the Curonians’ territory as well as the Tukums, Nogale, Lagzdīne hill forts also found in northern Kurzeme. 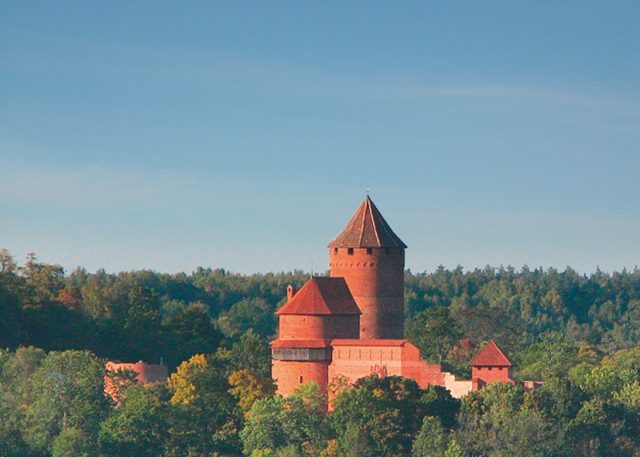 Analysing the development of the Daugava Livonian population centres, archaeologist Andris Caune concluded that from the 10th to the mid-12th century the main centre was at the Daugmale hill fort and Salaspils Laukskola site. In the 12th century, the villages at the upper end of Dole Island – Salaspils, Holme, Rauši, Vampenieši – were the main centres, but did not expand into towns as Daugmale had.

During the 12th century, Rīga began to evolve into a town. At this time there were two villages on a peninsula with an area of ~30 hectares bounded by the Daugava and Rīga Rivers. One village was located by the natural harbour at the mouth of the Rīga River and the other on the bank of the Daugava. There was a burial ground in the middle of the peninsula, east of the present-day location of the Dom Church, and next to it was a cult site. Most of the inhabitants of these settlements were Kurzeme and Daugava Livonians. 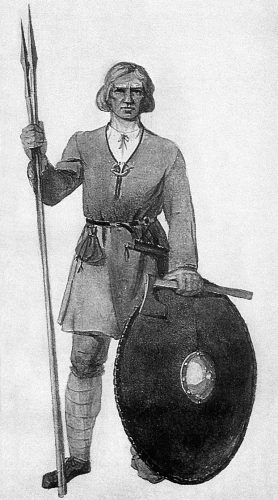 Man’s dress. Reconstruction according to Salaspils Laukskola 315. burrial. A. Zariņa, 1988.

The description by Hermann von Wartberge in his Livonian Chronicle of the invasion in 1345 of the Sigulda region by Lithuanian Grand Duke Algirdas confirms the Livonians maintained their sense of ethnic identity into the 14th century. In it a Livonian presents himself as king of the entire Livonian nation.