In ancient times, Livonian was spoken across a large part of present-day Latvia – in northern Kurzeme, in the Lower Daugava and Gauja regions, in north-western Vidzeme, and also to some extent in areas directly across the border in present-day Estonia. Slowly assimilating into the Latvians, the area where Livonian was spoken decreased and by the mid-19th century it could only be heard in the north of Vidzeme and Kurzeme. For this reason, it is customary to distinguish the Vidzeme and Kurzeme dialects of Livonian.

The Vidzeme dialect, which is also called the Salaca Livonian language, was spoken in the ancient Livonian region of Metsepole and was documented in the mid-19th century near the Salaca and Svētupe Rivers. It seems likely that in the past, there also existed Daugava, Gauja, and Idumeja varieties of Livonian in Vidzeme. 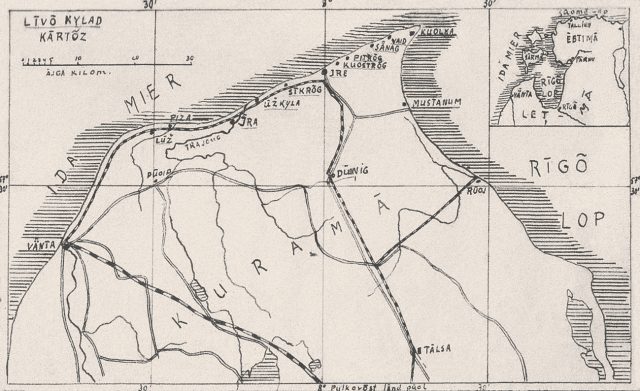 Modern Livonian is formed by the Kurzeme dialect of Livonian, which was originally spoken in the Livonian fishing villages along the northern coast of Kurzeme. It has two main dialects of its own – the Western and Eastern dialects – which are divided by the Irbe River (Livonian: Īra joug). In Lielirbe, located at the mouth of the Irbe River, the Western dialect was spoken incorporating certain Eastern features, therefore, sometimes the language of this village is called the Middle or Transitional dialect. The Eastern dialect of Kurzeme Livonian is the basis for the modern Livonian literary language.