The Livonian traditional menu contained foods gathered from nearby areas. Farmland was poor and so grain and potato harvests were small. Bread was baked from various kinds of flour though yeast rye bread was the type most commonly eaten. Various types of pies were also baked with rye flour for holidays. Carrot pies were especially popular (sūrkakūd or sklāndakakūd, Latvian: dižrauši or sklandarauši). These were made from unleavened rye dough and were baked for Christmas and weddings. Carrot pies were also baked by Latvians in Kurzeme and Zemgale for special occasions. Another ancient pie variety were “fat pies” (razākakūd), which were made from unleavened rye dough and then soaked in fish or pork fat after they had been baked. During periods when there was a lot of cod, the Livonians would bake barley flat bread (plädīņd) with dough made from flour, water, and fresh cod liver.

Bread would also sometimes be baked using barley, though barley was mostly processed into pearl barley, which was used for cooking milk or meat gruel or even porridge. It was eaten with a sauce made from cooked meat, cream, or with lingonbery or bilberry jam. These were made without sugar, which was expensive. Barley porridge is considered the most ancient cereal-based food in the Baltic region.

There was little milk in Livonian households and it was used only for adding fat content to food. Sour milk was used for drinking, though it was first skimmed of cream, which was then used for making butter. Quark was rarely made and only in small amounts, as there usually was no leftover sour milk. For this reason, curd cheese (sȭira) was made very rarely. The most common milk-based food and drink made also elsewhere in the Baltics was sour barley and curd gruel (Latvian: skābputra), which was a fermented gruel made of barley cooked in water served with milk and sour milk.

Meat was salted and smoked so it could be eaten later. The practice of adding meat to fish dishes (for example, adding cooked bacon) to give them a meat flavour was characteristic of the Livonians. What is harder to get is, of course, what seems the tastiest.

As potatoes grew well in the sandy coastal soil, they became increasingly popular in the second half of the 19th century. Potatoes were used for making porridge, baking flat bread, and preparing dumplings. They were usually boiled without peeling. Various kinds of soup were also cooked in the Livonian home, including meat, fish, pea, bean, cabbage, and others. If a soup was made with meat, then milk was not added. If it was made without meat, then milk was almost always added. Fish soup was made both with milk and without.

Fish formed an important part of the Livonian diet. They were cooked (on a spit above the coals in the hearth or in the oven), smoked (hot and cold smoking techniques were used), and also salted. Salted fish were eaten in the winter when it was not possible to go out to sea. 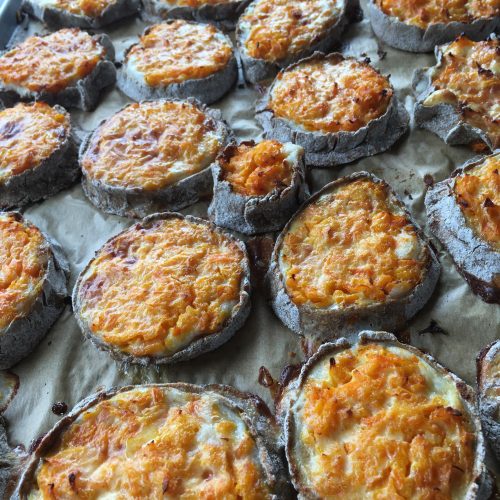 Carrot pies prepared by participants of the Livonian Summer University, 2017.

Every cook has a slightly different carrot pie recipe, which means that there is no “right” recipe with exact measures of ingredients. The main thing, which never changes, is the unleavened rye dough base, which long ago could have a diameter of even 20 cm, but has since gotten smaller. In older recipes wheat flour, semolina, and sugar were not used. Nowadays some cooks also add caraway seeds to the carrot filling and sprinkle the pies with cinnamon, which other cooks consider completely wrong. So, you can only find a recipe matching your own tastes through experimentation.

This recipe is based on one told by Lizete Lepste of Grabu farmstead in Mazirbe in 1927.

In the morning make a thick dough from regular rye flour and warm water, also add a little bit of salt. Let the dough sit for a short while covered by a cloth and then roll it into long 15 cm thick rolls. Sprinkle some rye flour as you roll these out. After that cut the roll into 10 cm long segments and put them on the table where you sprinkled the rye flour. Then roll each piece of dough on the table with your hands until it resembles a 6-8 cm thick sausage. Cut this into 3-4 cm long segments, first press them flat into circles in the flour. Then roll them out into thin, approximately 0.5 cm thick, bases for the pies with a diameter of 15-20 cm. Turn up the edges all around each base to a height of 1.0-1.5 cm. The finished bases are placed on platters, which have been rubbed with grease or butter.

The fillings are prepared at the same time: boil potatoes and carrots in separate pots, whip the butter. Mash the cooked potatoes, but cut the carrots into small pieces (nowadays the carrots are grated).

The bottom of the filling is made from the following ingredients: buttermilk, wheat flour, semolina, mashed potatoes. Long ago semolina was not used, likewise barley flour was used instead of wheat flour in the past. Mix all these together into a fluid gruel. Cream and butter can also be added to this mixture.

The top part of the filling is made of mashed potatoes, grated carrots, and cream or milk, also butter if you have it. All of this is also mixed well and it should have a structure, which is a bit coarser and thicker than the first mixture.

When everything is ready, put in 3-4 full regular tablespoons of each filling into the pie bases and even them out. Put the potato mixture in the bottom and then the carrot mixture over it, both in about equal amounts, so that the base is full almost up to its edges. Then put them into a hot oven for 5-10 minutes and bake them until their surfaces are brown. Eat them cold. 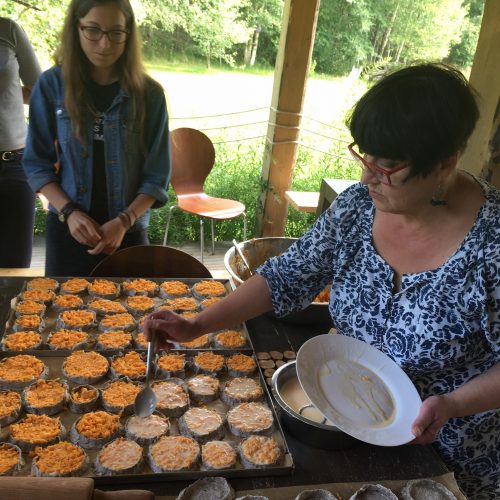 As is fitting for a real Livonian recipe, exact amounts for each ingredient are not given here, as this depends on the number of people eating and the size of their appetites as well as the cook’s own views on whether a soup should be thick or thin.

Place the boiled eggs, sliced up pieces of herring, and finely chopped pickles and herbs into the sour milk or kefir. Mix and let sit so that the flavours can combine. Serve with hot unpeeled boiled potatoes.

“Stragnams” is a word used to refer to a boggy or miry spot in the Livonian-influenced dialect of Latvian spoken in northern Kurzeme.