Much is known about Livonian dress in the 10th-13th centuries from archaeological excavations. Women wore sarafan-like dresses, which were held together at the shoulder with turtle-shaped brooches connected by a chain ornament or decorative pin. Skirts were either brown or blue and were worn with a jacket. The most ornate part of the costume was the large square woollen shawl worn around the shoulders. Pewter and lead roses were used for decoration as well as bronze spirals and rings in the corners. The only decoration on men’s clothing was a brooch worn on the chest used for pinning closed the shirt, which was typically linen. Men’s clothing also included a coat, trousers, leg wraps (puttees) extending up to the knees, and a fur cloak. 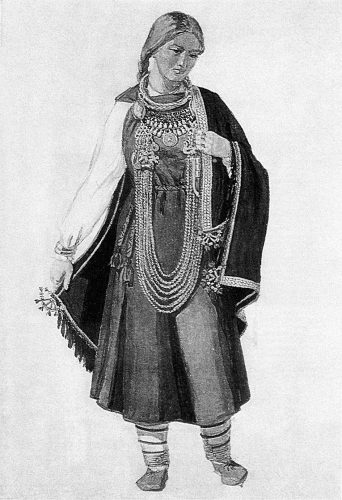 Little remains of 19th century Livonian folk dress in museum collections or with Livonian families. However, Livonian traditional dress can be reconstructed from this period thanks to remaining materials as well as oral and written accounts.

Women wore tunic-like shirts (Livonian: serk), jackets (vamž, jak) or bodices (būoršt), and skirts (gūngaserk). The oldest skirt designs had vertical stripes with colourful ribbons sewed along the bottom edge of the skirt. Livonian women also wore woollen shawls (kȭrtan) and while some still wore the older style white shawls at the end of the 19th century, colourful shawls with fringed edges (villikat) had become more common by this time. In cool, rainy weather, Livonian women would wear sleeveless long coats (jupkõ) on their shoulders, which were just like regular coats, only wider. These were made from dark, striped cloth and worn folded over twice. During rainy weather, the top layer would be worn as a hood. Livonian women liked commercially made silk, cotton, and fine wool scarves (krīzdag). These were worn around the head or on the shoulders. Married women wore bonnets (mitš) with beautiful ornamentation on the back consisting of brocade and silk ribbons, bits of cloth, and glass pearls. Women also would wrap long, white scarves (mundak) around the bottom half of their faces covering their cheeks and chin and tying them at the nape of their neck. A colourful kerchief or bonnet was worn with this face covering. On important holidays, women would also wear fine, white aprons (ežōrõn) made from purchased fabric. Their jewellery consisted of various kinds of bead necklaces. 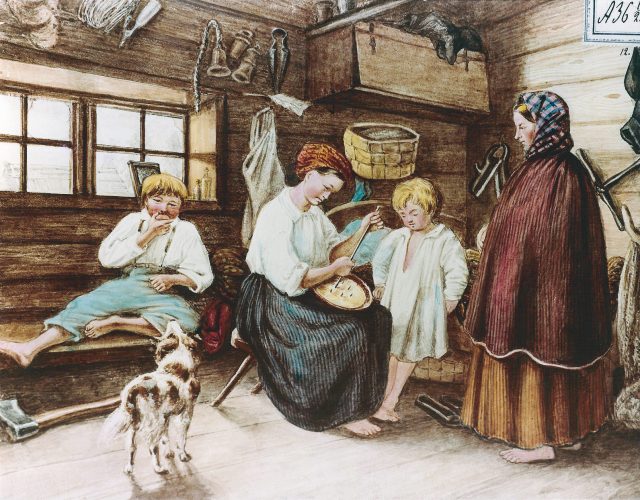 Men wore shirts, trousers (bikšõd), and coats (am). Men’s shirts were also tunic-like with rather wide turn-down collars, which were fastened using string. A scarf would sometimes be worn around the neck. Trousers typically extended to the knees. Socks (sǟrsukād) were worn and tied below the knees with a woven ribbon (sǟrpaggõl, Latvian: prievīte). Livonian men preferred coats that were black, dark blue, dark grey, or white. Frock coats were worn less often and were typically worn over the shorter coat as an overcoat (mantõl). These did not have buttons and were bound with a belt around the middle. The most common types of shoes were leather peasant shoes (Latvian: pastala) or bast shoes woven from osier or juniper. During the summer people would often go barefoot and save their shoes and boots for holidays and special occasions.

In the beginning of the 1930s, responding to increased attention to culture and due to greater community activity, it was decided that the Livonians should revive their traditional dress. These new folk costumes mostly preserved 19th century traditions, though some unmarried Livonian women began wearing bonnets, which historically were worn only by married women. The next step in the evolution of Livonian folk costume design occurred in Mazirbe thanks to Rūdolfs Ermanbriks and his wife Mirdza both of whom were teachers at the Mazirbe Primary School. New folk costumes were made for the Mazirbe women’s choir in preparation for the 1948 Song Festival. In the festival procession, the singers can be seen wearing folk costumes with metal chain ornaments, a woven belt around the waist, and the bottom edge of their skirts decorated with colourful ribbons. Similar costumes were worn in the 1950s by members of the Kolka women’s choir directed by R. Ermanbriks. The skirts had a dark striped design, the bodice was black. The shoulder inserts were decorated with four rows of continuous backstitch. A two-part bonnet had attractive decoration on the back. There was white lace around the brim of the bonnet. The woven belt was 21 mm wide and 230 cm long with a white, pink, and blue design. The chain ornament was drawn based on samples found in archaeological excavations. On the front of the shoulders a plate perforated with small holes was attached to square chain holders, from these 6-8 metal chains stretched across the chest. 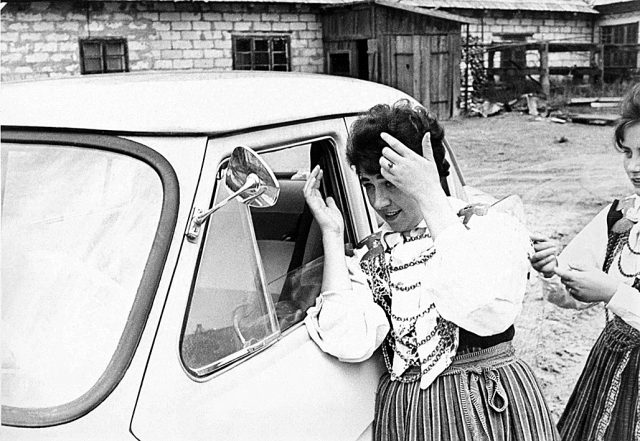