Over the course of the last century, music has become central for the Livonians as a means for asserting their ethnic identity and as a community-building activity. Between the two world wars there were several choirs in the Livonian villages, though the next major musical renaissance only arrived in the 1970s. The Rīga Livonian ensemble Līvlist (The Livonians) was established on January 8, 1972. The Ventspils Livonian ensemble Kāndla (Livonian zither) was also founded during the same year, though it already began auditions in October 1971. Livonian musical heritage was also popularized by the folklore group “Skandinieki”.

In Fall 1978, Līvlist began rehearsing its most significant production, “A 19th century Livonian wedding” (Latvian: Lībiešu kāzas 19. gadsimtā). It was created by Dzintars Kļaviņš who used the descriptions of wedding traditions in Miķeļtornis recorded by Jāņ Prints, Jr. as the foundation for this performance. The production premiered on July 8, 1979 in the yard of the Livonian farmstead at the Latvian Ethnographic Open-Air Museum. On December 19th, the production was also shown on Latvian television, but on May 19, 1981, on stage at the Latvian National Theatre. Another ambitious production “The Warp and Weft of Winter” (Latvian: Ziemas laiku meti) was staged in 1982. As there were also children in the ensemble, D. Kļaviņš also staged “The children’s song suite” (Latvian: Bērnu dziesmu svīts) and “Livonian play songs” (Latvian: Lībiešu rotaļdziesmas). 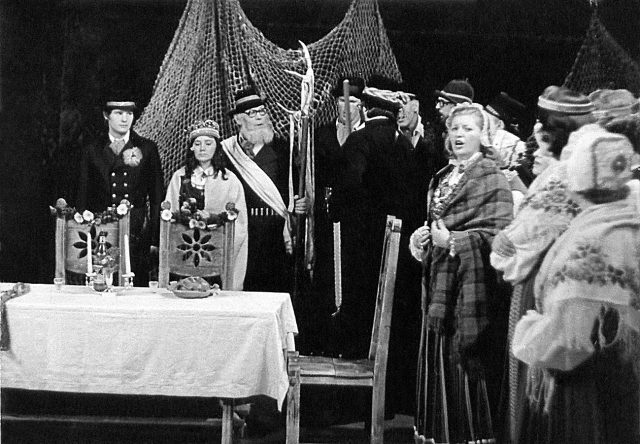 Following the restoration of Latvian independence, several new ensembles were established, some of which were only short-term projects. For example, the Livonian Culture Centre’s youth ensemble Vīm (Rain), which was established in 1994. The ensemble Kōla (Island) was later formed from Vīm by Baiba Damberga and her daughters. In 1998, Julgī Stalte established the youth ensemble Kalā jeng (Fish’s soul).

In the 21st century, several more groups were added to the constellation of Livonian ensembles. The Kolka rural parish Livonian ensemble Laula was formed in 2001, but the Ventspils Culture Centre’s Livonian Ensemble Rāndalist (Coast dwellers) was formed in March 2004. Nurmorkestõr (Country orchestra), whose director is musician and photographer Jānis Mednis, was founded in Rīga in 2008. This ensemble also functions like the youth ensembles that came before it. There are no regular performances and the group meets to practice before concerts. The youth ensembles also differ from the other groups in another fundamental way. The repertoires of the other ensembles contain songs in Latvian, but the youth groups have tried to avoid this. Likewise, the youth ensembles have worked to avoid the classic Livonian ensemble repertoire by either writing new songs (as was done, for example, by Ulla Ernšreite-Fraser for Vīm) or by creating interesting arrangements for classic songs and using different types of musical instruments (as has been done by Nurmorkestõr).

The choir Lōja (Boat) was founded in Salaspils in October 2007 (conductor Ģirts Gailītis). The choir decided that the study and popularization of Livonian choir music, language, and traditions would be its central role. In 2012, the choir published the collection Līvõd lōlõd pivād. Loulkub 2012 (Livonian Song Festival. Song Collection 2012).

This century also stands out in the history of Livonian musical life due to another interesting fact. For the first time a song in Livonian (Rišti räšti, 2010) reached the final round of the Latvian Eurovision song contest. Valts Ernštreits was the author of the song’s lyrics, but its melody was written by Latvian composer Raimonds Tiguls. Tiguls is also connected with another unique work relating to Livonian culture. “Green. White. Blue.” (Latvian: Zaļš. Balts. Zils) was published in 2006 as a photo album (author: J. Mednis) accompanied by a compact disc on which R. Tiguls had created modern-sounding arrangements for motifs from traditional Livonian folk songs. This music album received two nominations at the Annual Latvian Music Recording Awards in 2006 for the best modern folk music album and the best instrumental, film, or theatre music album. 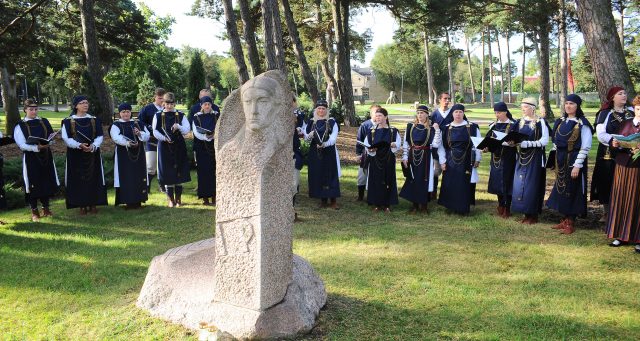