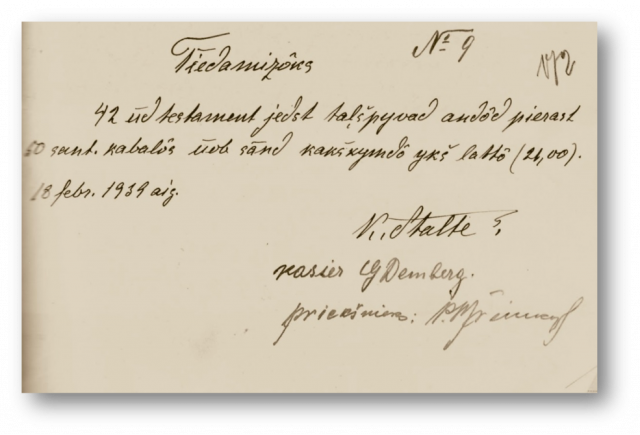 Kārlis Stalte’s Confirmation regarding the received fee for 42 copies of the “Ūž Testament” (New Testament) translated into Livonian, which the Livonian Union purchased as presents for Christmas

Since 1937, the Livonian Union has been preparing Christmas gifts for Livonian children as well as members of the Union. Handkerchiefs, headscarves scarves, socks, candies, cookies, caramels, Christmas tree candies, gingerbreads were bought in Riga, Ventspils and Mazirbe. Among the receipts for the purchase of traditional Christmas gifts, special attention is drawn to the document “Tīedamizõks” signed by Livonian culture and public figure Kārlis Stalte.

I have received 21 lats for 42 copies of “Už Testament” (50 santims each) for Christmas presents.

The first edition of the “Už Testament” (New Testament), which came into her possession on August 3, 1937, has been passed down to me from my mother Valda Marija Šuvcāne.

The title page of the first edition of “Ūž Testament”

The publication of the New Testament in Livonian in 1937 was an important event for the Livonian community, as it was an important addition to the very poor range of Livonian literature. The road to the translation of the Bible was long and difficult. The idea to translate the Bible into Livonian language dates back to 1922. On December 17, 1922, Kārlis Stalte, a Livonian living in Mazirbe, wrote in a letter to Professor Lauri Kettunen (1885–1963) that he should translate the Bible into Livonian and write some sacred songs, as well as look for a pastor to preach in Livonian. K. Stalte was involved in the founding of the Livonian public organisation “Līvõd Īt”. Even before the founding of the Union, he tried to solve important issues for the Livonian community – the organisation of the Livonian parish, the teaching of Livonian in schools, and the provision of a Livonian-speaking pastor. He also continued to address these issues as chairman of the Livonian Union. K. Stalte was also the verger of the Mazirbe church congregation for many years.

The intention to publish the Bible in Livonian came true only 15 years later. It was translated by Kārlis Stalte, who was fluent in German and Livonian. In 1934, the translation was completed and editing began. The manuscript of the translation of the New Testament was examined by the Finnish pastor Helle Kalervo Erviö (1906–1951), and with his remarks the translation reached Finland, where it was examined by Professor Lauri Ketunen. The main proofreading was done by Väinö Kyröla (1909–2003). At the end, the proofreading was also reviewed by Edgars Volganskis, a Livonian student from the village of Košrags at the University of Helsinki (from 1940 in Vālgamā, Vaalgamaa, 1912–2003).

In March 1937, the first part of the New Testament was published in the publishing house of the Finnish Literary Society in Helsinki. „Ūž Testament. Evangeliumõd ja apostõld tīed“ – Gospels and Acts of the Apostles — 1,500 copies. Of these, 500 were binded, while the rest remained in the warehouse awaiting the second issue “wave”. According to the data of the Awakening Society, no more than half of the bound books have been distributed.

Judging by the articles in the Livonian newspaper “Līvli”, the “New Testament” may have reached the Livonian seashore at the end of July 1937. To whom and how it was shared, I have no information. A copy of V. M. Šuvcāne’s “Ūž Testament” is dated to August 3, so at the beginning of August some copies had already been received by the residents. The document signed by K. Stalte shows that 42 copies were bought by the Livonian Union as Christmas gifts of 1938.

The complete edition of the “Ūž Testament” was published in 1942, when the 300th anniversary of the Finnish Bible was celebrated. However, this largest Livonian book was able to reach its addressees much later, in the 1990s, when the number of speakers of the Livonian language had significantly decreased. 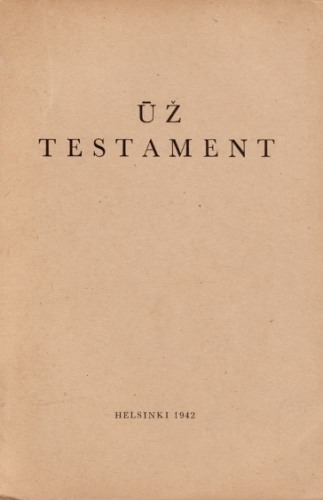