The oldest surviving cemetery cross with an inscription in Livonian language is in Kolka Lutheran cemetery in the North Kurzeme Livonian seaside cemeteries.

Latvians also call October the veļu mēnesis (the month of the souls of the dead). And that is a great reason to look at the Livonian seaside cemeteries, where most of the coastal Livonians who lived in the 19th and 20th centuries rest. However, there are very few tombstones with inscriptions in Livonian in the Livonian cemetery in North Kurzeme (Livonian: Kurāmō). Most of it is in Kolka cemetery. In the Liv language, October is Viimsi – Rainy Month. 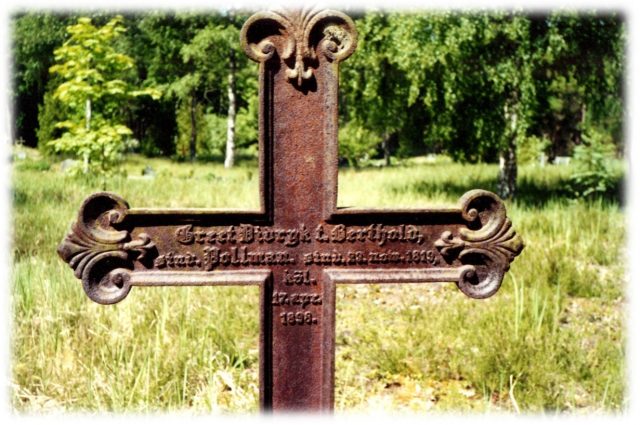 The oldest surviving grave cross with an inscription in Livonian says that Grieta and Andrejs Bertholds’ are resting here. On the east side of the solid iron cross is the inscription:

On the west side of the cross horizontally:

Žonaki homestead was one of the oldest in the village of Vaide, and it was mentioned in the list of contributions in 1736. Bērtulis became the owner of Žonaki in 1789. In 1834 he took the surname Bertholds for himself and his sons.

During the Livonian uprising, in 1860, the management of Žonaki was already in the hands of Bērtulis’ grandson Andrejs Bertholds and his wife Grieta, the sister of the Livonian teacher and Kolka’s verger Niks Polmanis. From the family of eighteen children only eight survived to grow old. The Bertholds’ family was widely branched, thanks to the large group of children of Bērtulis’ son Ansis Bertholds (1793) and, even more so, the descendants of Berthold’s grandson Andrejs Bertholds (1816). In this vast and strong Livonian family grew several important people and bright personalities in the cultural history of the Livonians, who did not disappear in the distant ways of the world.

After the revolt in Dundaga, Andrejs Štālers (b. 1827 (?), Stahler) became the leaseholder of Kolka Vecvagari homesteead. There were seven children in the family. His son Andrejs Štālers (1866–1943, Germany) was a Livonian language informer to the Finnish linguist Eemil Nestor Setälä, who in 1888 was on an expedition to the Livonian Coast. During the time of Latvia’s independence, he was the first editor of the Livonian monthly “Līvli”. He also provided significant assistance to the Finnish linguist Lauri Kettunen in compiling the Livonian language dictionary.

Monument to the members of the Stalte family with a longer text in Livonian. Over time, the text has become difficult to read.

The folklore practice work of Ilze Pobuse, a first-year student at the Faculty of Philology of the University of Latvia, in 1999 was related to the study of Livonian cemeteries. At that time, the text was easy to read. In I. Pobuse’s work [LFK, 2101, 5467-5758] it is written as follows:

Here in Kolka cemetery
to reest forever has gone
a Livonian family.
Kārlis Stalte, died in 1925.
His mother Mary in 1910.
His son August 1939.

Emma Hausmane with Professor Eduard Vääri in Kolka Kastari in the 1960s.

By the words of the resident of Kolka Vilnis Helmanis: “They had three sisters – my grandmother Trīne Feimane, Anna Hausmane and Emma Hausmane. Emma was unmarried. During the First World War, she evacuated to Estonia, learned Estonian perfectly. She lived there until the early 1920s. In Estonia, she worked as an economist for General Johan Laidoner. She probably returned to Latvia in the late 1920s. In Riga, Emma worked in Mežparks for wealthy families as a manager of the household. Emma returned to Kolka after the Second World War, to live in the homestead of Kastari.

Emma spoke Livonian very well. 1950s-1960s Scientists from the University of Tartu went on expeditions to Kolka and visited Emma a lot. She taught Livonian, told stories, folklore, corresponded with the Estonian professor Eduard Vääri. She spoke exclusively Livonian to her sister Trīne.”

In July 1962, the XVI Scientific Expedition of the Folklore Sector of the Institute of Language and Literature of the Academy of Sciences worked in Kolka. Scientists also wrote down the household customs and beliefs told by Emma Hausman. Her folklore samples are stored in the 1960s collection of the Latvian Folklore Repository. 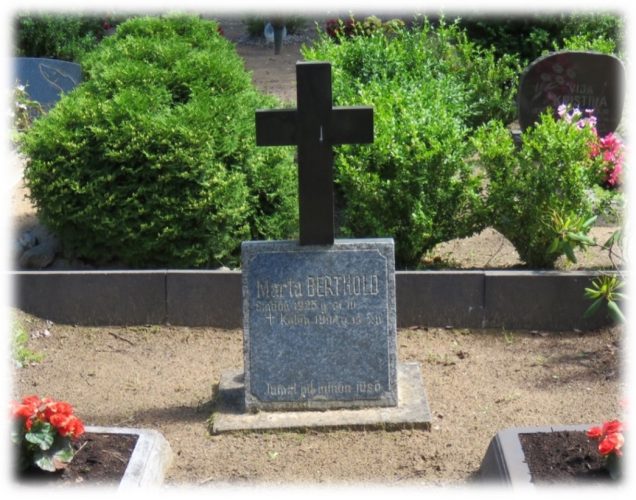 Receiving the Annual Grand Folklore Award for lifelong contribution to the research and preservation of Livonian cultural history in 2002.

Valda Marija Šuvcāne (b. Blūma), a Livonian cultural and social worker, was a member of the Riga Livonian Song Ensemble “Līvlist” for 34 years. She was one of the most active organisers of the renewal of “Līvõd īt” (Livonian Union) in 1988, she taught the Livonian language in Riga from 1991 to 1995. In 1991, the publication “Līvõd tekstõd” (Livonian Texts), the Latvian-Livonian Phrasebook (1991) and a picture book for the younger generation with illustrations by Margarita Stāraste “Urū! Urū!” (1994). Published articles on Livonian culture in the monthly “Līvli” and in the Livonian yearbooks. Author of the books “Lībiešu ciems, kura vairs nav” (2002), “Lībiešu folkloras izlase” (2003), “Mazirbe – mazs ciems jūrmalā” (2006).