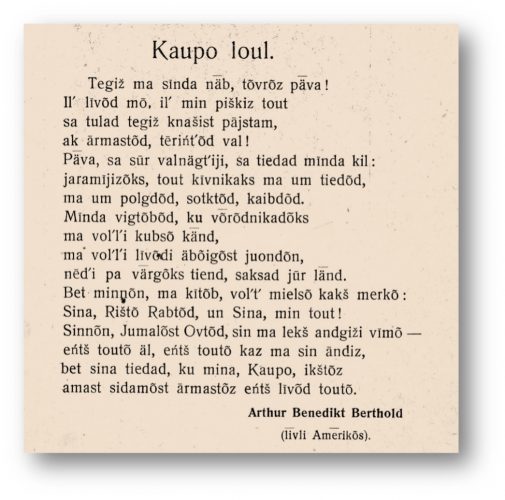 In Krimulda “Kaupo’s Lament” was sung in Livonian

Twenty years ago, on September 22, 2001, a memorial to the Livonian king Kaupo was unveiled near Krimulda Church. This is the day when Kaupo died in Estonia after being seriously wounded in 1217

The Riga Livonian ensemble “Līvlist” also took part in the event as they were entrusted with the opening of the festive event. 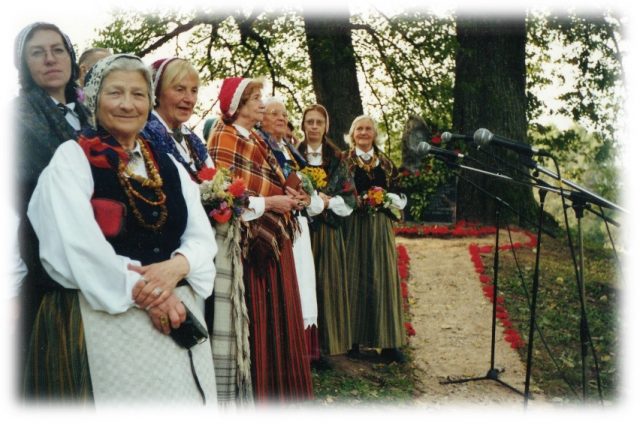 At the beginning of the event, the poem “Kaupo’s Lament” by the Livonian American Arthur Benedikt Berthold was read in Livonian, in Latvian the peom was reproduced by Valda Marija Šuvcāne:

The English rendering has been done by Uldis Balodis:

Oh, Sun, beloved again I see your shine!
Over Livonian lands and nation,
glinting, glimmering you arrive again,
beloved light, long-awaited and welcome.
Oh, light bringer, you illuminate me:
I’m called traitor, my people’s enemy.
My image – despised, damned, denounced,
they accuse me of intrigues,
of siding with strangers,
consorting with Germans
of leading Livs to ruin, to bondage.
But always my path had but two guide stars:
My people and You, Cross Sacrifice, holder of His favor!
And so I brought them to You,
I gave You their wealth and wellspring.
And now you know too that I, Kaupo, ever
loved my people, my Livs with my whole heart.

Perhaps September 22, 2001 was the only time that this poem dedicated to the Livonian king Kaupo was voiced in the Livonian language publicly.

Regarding the unveiling of the monument in Krimulda on September 22, 2001, V. M. Šuvcāne has written in her notes:

“The monument was created by the sculptor Gaida Grundberga, it was erected on a hill, which (according to one version) can be considered the site of Kaupo’s grave, but this version is quite improbable.

At the unveiling of the monument, our ensemble was responsible for all the initial activities. First we sang “Līvli ma ūob”. Then our singers Ira and Zigmunds removed the garland of flowers and oak leaves from the monument, in the meantime we sang “Piškist īrõd”. I read A. B. Berthold’s poem “Kaupo loul” in Livonian, but Zoja the Latvian rendering. At the end of our performance we sang “Kis kil mīnda”. This was followed by the reading of the National Theater actor Rolands Zagorsks “The Legend of Kaupo”, which was supplemented with musical accompaniment by the students of Krimulda’s School of Arts. Then the pastor of Krimulda Church Austris Rāviņš, the Catholic priest Artūrs Krištapovičs and the new Catholic pastoral candidates performed their duties. The monument was consecrated. 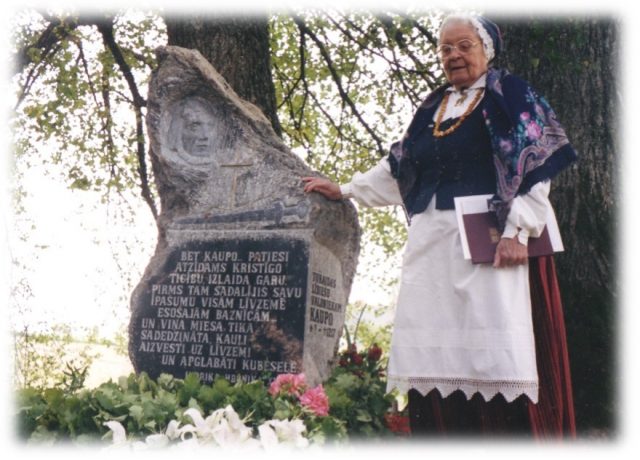 Next, an ecumenical service was held in Krimulda Church, where a Lutheran pastor and a Catholic priest performed their duties. After a short coffee break, a conference or discussion of sorts followed. Anna Jurkāne, director of the Turaida Museum Reserve, talked about Kaupo. Archaeologist Andris Caune, historian Guntis Zemītis, Livonian researcher Tenu Karma, artistic director of our ensemble Dzintars Kļaviņš and others spoke on this topic. A valuable and interesting day.” 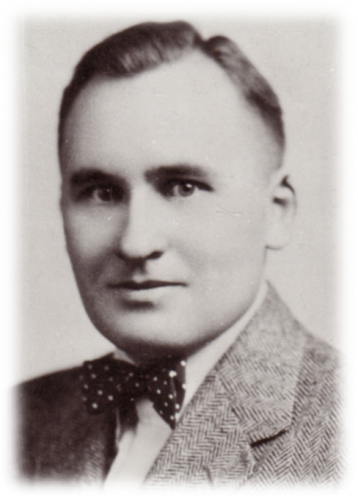 Library scientist Arthur Benedikt Berthold was born on January 8, 1905 in the family of Andrejs Bertholds, a Livonian living in Dundaga parish, Ostu village, and a captain of the Brusa. Mother Karlīne Zustriņa was the daughter of a wealthy owner from Nevejas Juši. It should be noted that Arthur’s father Andrejs Bertholds was the brother of the outstanding Livonian folklore narrator Marija Šaltjāre and the captain of sea yachts in America.

In 1923, Arthur Benedikt moved with his father and sister Hildegard to live in the United States. There he received a good education, which enabled him to hold important positions in public institutions. His interests included comparative literature, library sciences, and American colonial culture. A. B. Berthold has published a number of studies on the topics of his interests in professional journals, discussed books and also wrote poems.

The second field of work to which A. B. Berthold devoted a lot of energy was to study the history of the Livonian people. He collected information about Livonian folklore narrators and members of the long-standing Berthold family, collected Livonian books and publications about Livonians. He began to create a Livonian card index and a book “Livonian Bibliography”. He sought to promote the Livonian identity in America.

Arthur Benedikt Berthold died in 1976 without completing the article promised to professor Edgars Andersons for the Latvian Encyclopedia (1962–1982, USA) about the fate of the Livonians over the past 75 years. His dream – the book “Livonian Bibliography” – also remained unfulfilled.

“Kaupo’s Lament” is published in the Fifth Livonian Reading Book (Vīdõz līvõd lugdõbrōntõz, Tartu 1926). It is believed that it was sent to the publisher by Albins Bertholds, a relative of A. B. Berthold (1865–1932), who kept in touch with his American relatives, as well as provided his own articles for Livonian publications. 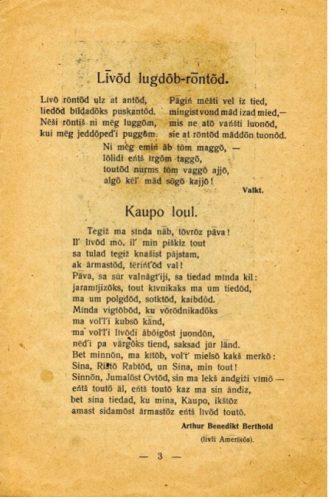 The first page of the Fifth Livonian Reading Book

One of the most controversial personalities of the Crusade Period at the beginning of the 13th century was Kaupo, the Livonian leader, of Turaida. His name is mentioned in both 13th century Livonian Chronicles – the Livonian Chronicle of Henry and the Livonian Rhymed Chronicle. However, it is in the Chronicle of Henry that the widest evidence of this personality’s fate can be found. Kaupo’s social status was unclear to Henry, as he was called “as if king and elder” in the Chronicle of Henry. This has given rise to various interpretations among historians, but for the most part, Kaupo’s social and political status in the Livonian lands of Turaida is equated to that of a king or elder. It is traditionally believed that he owned several castles in Turaida and Krimulda and had a military force at his disposal.

It is believed that Kaupo was one of the first Livonians of Turaida to be baptised and as a result got the name – Jacob, whose Latin abbreviated form is Kaupo. It is believed that this happened already in 1191, when the missionary Theoderich von Treyden worked in the Gauja Livonian lands.

In 1203, Kaupo together with Theoderich, who then was the first abbot of Daugavgrīva, went on a pilgrimage to Rome, where he also visited Pope Innocent III. Upon his return from Rome, Kaupo gained the trust of the Crusaders, but lost the trust of his people. Kaupo was exiled from the lands of the Livonians, and remained in Rīga and Cēsis.

The Livonian king Kaupo died on September 22, 1217, after being wounded in a battle with the Sakalians in Estonia. The Livonian Chronicle of Henry states:

“But Kaupo’s body was pierced with a spear on both sides, at that moment Kaupo faithfully remembered the sufferings of the Lord, received all the sacraments of the Lord, and, truly acknowledged the Christian faith, then his soul left his body, but not before he divided his property to all the churches in Livonia. And there was mourning for him, Count Albert, and the abbot, and all that were with him. And his body was burned, and his bones were taken to Livonia, and buried in Kubesele.”

This message of the fateful event in 1217 is engraved in a memorial stone to King Kaupo, unveiled in 2001 and placed in the possible Kaupo tomb studied by the German historian Friedrich Kruse.

There are several versions to the location of Kaupo’s tomb site. According to legends of the 16th century, Kaupo’s remains are allegedly buried in Ikšķile Church. Another legend says that Kaupo’s ashes are buried in Krimulda Church. Several stories written at the beginning of the 20th century mention that Kaupo was buried in the “corridors of Krimulda Church”.

In 1839, Friedrich Karl Hermann von Kruse (1790–1866), a professor and historian at the University of Tartu, also addressed the history of the Baltics before the introduction of Christianity in the 12th and 13th centuries. While researching the ancient cemeteries around Kubesele, he dug a hill, which was considered a possible place for Kaupo’s grave. There, calcined bones were found that could be associated with Kaupo’s grave. The small hill, which is considered to be the place of Kaupo’s grave, is located at the foot of a bigger hill, on the bank of the small Runtiņi river, is oval in shape, about one and a half meters high, looks semi-natural. Written sources indicate that this was the place of research.

F. Krūze summarised the results of his research in the book “Necrolivonica oder Alterthümer Liv-, Esth- und Curlands” published in 1842 in Tartu. The book contains several drawings and situation plans of ancient sites, including Kubesele. However, the burial place of Kaupo has not been determined.

Due to his activities, Kaupo has been valued highly controversially in literature and journalism and in historical research. He has been praised by the German-Baltics, but condemned as a traitor to the people by Latvian historians, he has been called both an exile in his country and a victim of the contradictions of the era. In commemoration of the Turaida Livonian king, Kaupo, on the 800th day of his death in 2017, historian Guntis Zemītis has said:

“Kaupo’s assessment has varied from the image of the traitor to the saint. But the question he proposes is still relevant today – Did what happened 800 years ago usher in centuries of slavery, distort the character of the nation, making us a submissive peasant nation that preserved only the fragments of the values of the past in folk songs and fairy tales? Or did it bring us closer to Western civilization, the civilization that shaped the modern world as we now know it? ”