The students of Livonian along with their teacher Tuuli Tuisk and her colleagues from the University of Tartu were visiting UL Livonian Institute. It is always a great pleasure to receive good friends and truly devoted future researchers! 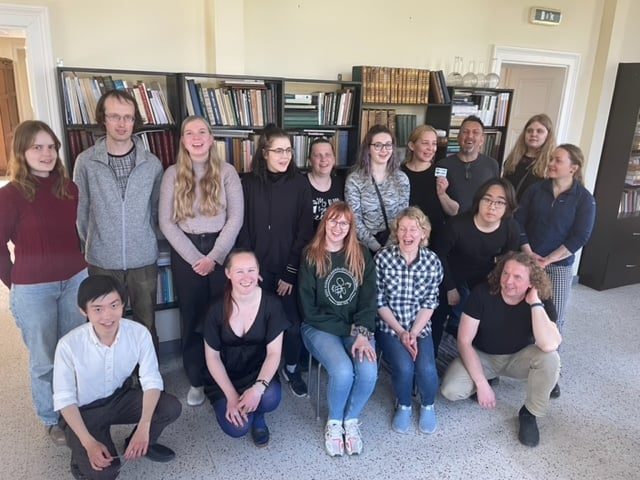 Valts Ernštreits, Head of the Livonian Institute of the University of Latvia visited the Latvian Embassy in France and met the children’s folklore group “Guntiņa” and their parents. Valts Ernštreits talked about the indigenous people of Latvia – about Livonians, the interaction between the Livonian and the Latvian language, and language similarities and differences. Children enjoyed the language games, how to reveal the similarities between the Livonian, Latvian, Estonian, Lithuanian and Finnish languages, as well as learning about the formation of the Livonian place names?

On April 8th, UL Livonian Institute Senior Researcher Renāte Blumberga was awarded the 2022 Aleksandrs Pelēcis Literary Award at the Talsi Main Library for her monograph “The History of the Livonian Community House: From First Plans to its Opening”. Renāte Blumberga’s monograph was among eight books published in 2021 on the cultural and historical life of Talsi municipality that were nominated for this award. The northern Kurzeme village of Mazirbe – located in Talsi municipality – is also the location of the Livonian Community House, which was dedicated in 1939. The award was established in 2000 by the Talsi City Council in honour of the 80th anniversary of the birth of poet Aleksandrs Pelēcis (1920–1995) who was born in Vidzeme, deported to Siberia, and spent the second half of his life in Talsi. Previous recipients of this award include UL Livonian Institute researcher Baiba Šuvcāne for her books “Senais lībiešu ciems Kolka” (The Ancient Livonian Village of Kolka, 2011) and “Sauc par Vaidi mūsu ciemu” (They Call our Village, Vaide, 2016). 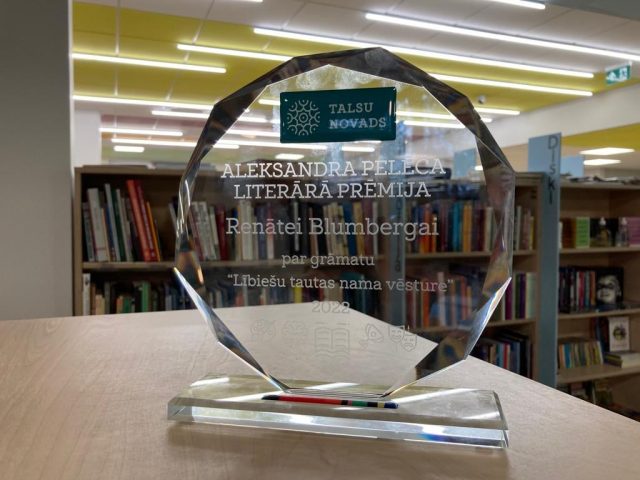 During the annual career education event “Shadow Day” for school youth, two students Jūlija Otomere from the 7th grade of Riga State German Gymnasium and Katrīna Lote Gaile from the 9th grade of Riga Imanta Secondary School shadowed the researchers of the Livonian Institute of the University of Latvia. Now we also have a name for the “Shadow day” in Livonian – Vōŗõd pǟva.

The director of the UL Livonian Institute, Livonian activist Valts Ernštreits, and researcher of the University of Turku, developer of the cultural contacts between Finland and Hungary Heino Nyyssönen have received a prize from EW Ponkala Foundation (Finland). The prize has been established in 1924 by the foundation established by the Finnish entrepreneur and patron Erkki Wilho Ponkala (1862–1943) and is rewarded for the development of cultural contact between Nations speaking Finno-Ugric languages.

Researchers Valts Ernštreits and Gunta Kļava of the Livonian Institute of the University of Latvia visited Ventspils Center Primary School and Tārgale Primary School, where they had presentations about Livonians, Livonian history, culture, and language to the senior students of both schools. Thank you for your great interest and attention to the students and teachers. 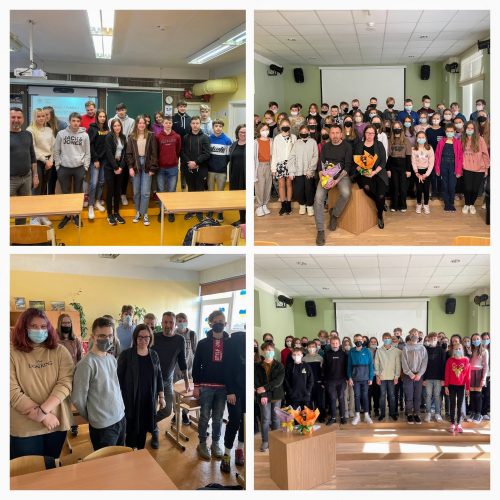 The International Decade of Indigenous Languages ​​(2022–2032) has been opened in Latvia with the Livonian tradition of waking birds in Mazirbe by the sea. Julgī Stalte and the choir “Lōja”, its leader Ģirts Gailītis, involved the event participants in the awakening tradition by telling about the origin of the tradition. Livonians believe that migratory birds do not fly in autumn, but spend the winter at the bottom or shore of the sea, river, or lake.

Minister of Culture Nauris Puntulis, Minister of Education and Science Anita Muižniece, and the International Decade of Indigenous Languages ​​Coordinator Irmgarda Kasinskaite-Buddeberg unveiled the Decade and participated in the event. The Livonian Institute of the University of Latvia introduced the Livonian language and culture preservation projects and the brand-new platform Livonian.tech – the digital resource for Livonia language and culture.

The wealth of mankind lies in the diversity of mankind, and only knowledge and understanding of this diversity is the basis for peaceful living together, as emphasized by Valters Ščerbinskis, the editor-in-chief of the National Encyclopedia, about the inclusion of the Livonian language in the titles of the encyclopedia.
The opening of the International Decade of Indigenous Languages ​​(2022–2032) was organized by the Livonian Institute of the University of Latvia in cooperation with the organizations of the Livonian community and the Latvian National Commission for UNESCO. We thank you Baiba Molnika, Zane Ernštreite, Ieva Ernštreite, Janusz Kaminski, Sigita Grinpukale from “Dvjūriņa”.

The University of Latvia, whose Vice-Rector for Humanities and Social Sciences Ina Druviete was also involved in the event, and the Ministry of Education and Science supported the awakening of birds and the symbolic beginning of new works in the decade. We appreciate your support! 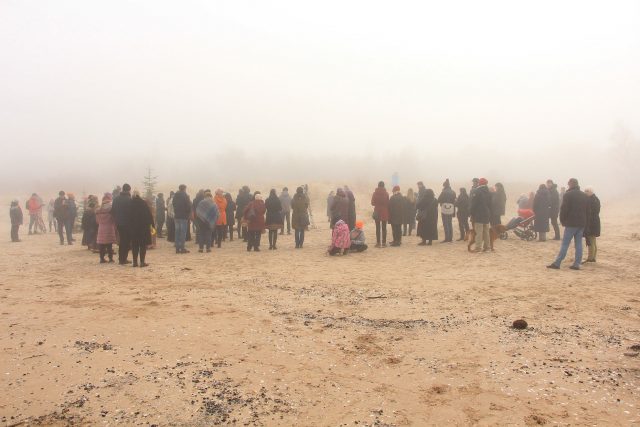 Milda Dailidėnaitė, Valts Ernštreits, and Gunta Kļava, researchers at the Livonia Institute of the University of Latvia, presented at the 6th conference “Digital Humanities in the Nordic and Baltic Countries” (March 15-18) on methods how to improve digital research tools in the Livonian language. Conference program here.

In the broadcast “Kultūras Rondo” of LR1 Head of the Livonian Institute of the University of Latvia, Valts Ernštreits talks about the United Nations (UN) Decade of Indigenous Languages (2022-2032) and the opening event, which will take place on March 19, at the Livonian Peoples House (Lībiešu Tautas namā) in Mazirbe. The ancient Livonian tradition of awaking birds annually takes place around the Easter celebration and symbolically marks the beginning of the Livonian New Year. This year’s tradition also features the beginning of the UN-proclaimed Decade of Indigenous Languages.

Today indigenous people of Latvia, Livonians, and the UL Livonian Institute are standing together with the rest of the people of Latvia protesting the war. Russia trying to defeat and enslave the people of Ukraine is a threat not only to its neighbors but to all nations and peoples around the world, including those living in Russia itself. Today in the name of Russia people are being sent to fight and to die in another country. Ukrainians are fighting not only for their own freedom but for the freedom of all peoples in the world. Long live Ukraine! 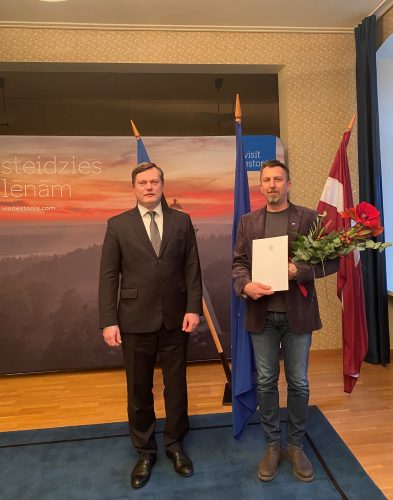 Thanks to a donation by Livonian cultural researcher and activist Zoja Sīle, the UL Livonian Institute’s collection now includes the correspondence of former Livonian Union chairman Maŗt Lepste from the period between 1925 and 1931. This correspondence includes many letters from some of the most important Livonian cultural researchers, activists, and supporters. Many of the letters found in this collection are also written in Livonian. This collection is a valuable source for research into the Livonian language and history. 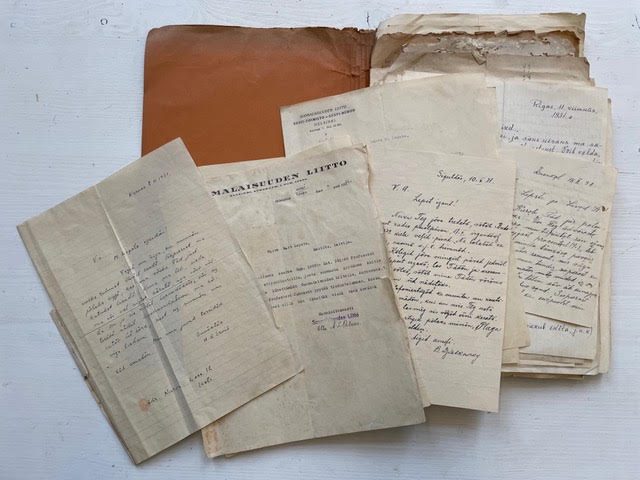 At the initiative of the University of Liepaja, UL Livonian Institute taught the course “Introduction to the Livonian Culture and Language” to the students of the study program “Cultural Management”. The course was developed at the “Livonian Summer University” jointly organized by UL Livonian Institute and the University of Tartu and is intended for acquiring basic knowledge of Livonian history, culture, and language for future researchers. The week-long and intensive lecture course ended on January 24 with presentations by the 2nd year students of the study program “Cultural Management”, in which students revealed their ideas for popularizing and reviving the Livonian intangible cultural heritage. 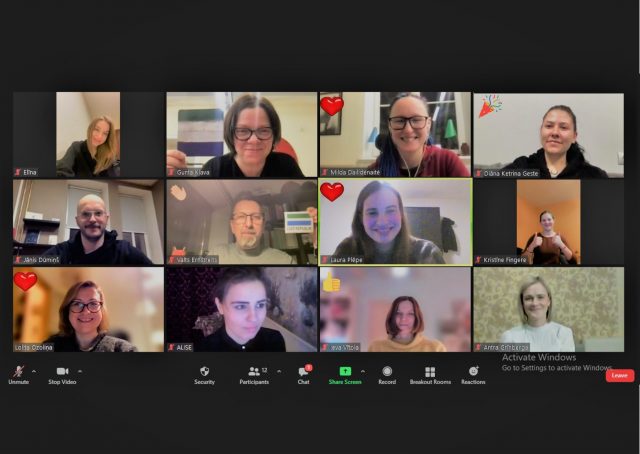 UL Livonian institute senior researcher Renāte Blumberga visited the Embassy of the Republic of Hungary in Rīga on the invitation of Ferenc Bányai, Hungarian Ambassador Extraordinary and Plenipotentiary to Latvia. The subject of this meeting was the Livonian Community House in Irē (Mazirbe) and the contribution of the Hungarian government to its construction. The ambassador and the Hungarian cultural attaché Annamária Bányai-Balázs wished to acquaint Renāte Blumberga – author of the book “Lībiešu tautas nama vēsture” (The History of the Livonian Community House) – with document copies from the National Archives of Hungary, describing the support given by Hungary to Livonian culture in the 1920s and 1930s. These documents were found by Cultural Attaché Annamária Bányai-Balázs in the archives last summer. As these documents were not available to the author while she was writing her book, she plans to write an article in the future based on them describing the history of Hungary’s support for the Livonians. Renāte Blumberga expressed her gratitude for the documents and the invitation to visit the embassy by giving the embassy a copy of her 2021 monograph on the Livonian Community House. 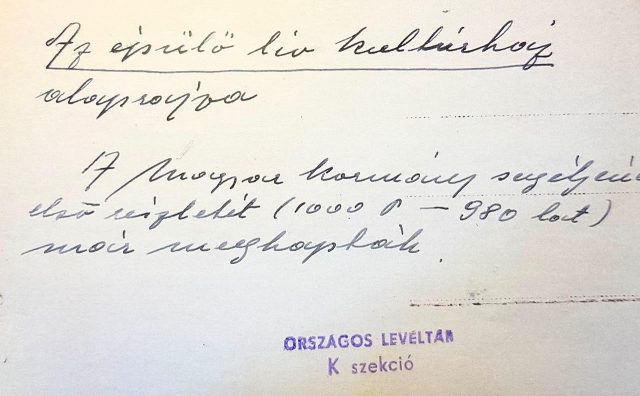 Valts Ernštreits, Head of the University of Latvia Livonian Institute talks about the intention to create a multifunctional Livonian language dictionary on the Latvijas Radio1 programme “Kultūras Rondo”. The dictionary will be supplemented with an audio pronunciation, English equivalents terms as a part of the State Research Programme “Letonica for the development of Latvian and European Society”. The data generated by this dictionary will also be used to create automated spelling tools, automatic translation and voice synthesis tools for the Livonian language. Also a post on the UL Livonian Institute Facebook page. 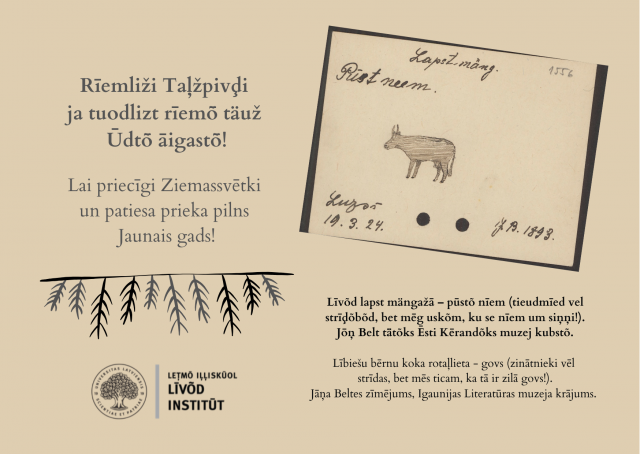